Get your orders in early to avoid COVID Delays! | FREE SHIPPING ON ALL ORDERS OVER $75

This recipe I created and tested last weekend when I had my lovely family over for lunch on Saturday. It’s a hearty winter meal, great for making on the weekend as it does take a little bit more time and preparation. This recipe does contain dairy, I’ve used organic pecorino cheese and organic butter in this meal. This recipe can easily be adapted to make it dairy free, simply leave out the pecorino cheese and use olive oil instead of butter in the pie crust, about 1/4 cup of olive oil would do.

Serves: I get 10 large pieces out of this pie and I serve it with a fresh salad on the side
Time: 2 hours

Preheat the oven at 180 degrees.

In a large mixing bowl combine the almond meal, coconut flour and pecorino cheese, season with a pinch of salt and pepper (go easy with the salt because the pecorino cheese also adds that salty flavour).

Now rub in the olive oil and butter until the mixture resembles bread crumbs and no lumps of butter remain.

Make a well in the centre, add the 2 eggs and mix until combined. The dough that is formed isn’t the kind of dough that you can roll out, its very crumbly, which is what we want!

Grease a large ceramic baking tray (Mine was 35cm by 25cm in size) with butter.

Crumble the pastry mixture evenly across the bottom of the tray.

You now want to press the mixture into the base of the tray and also up around the sides. Make sure that the pie base and sides are of the same thickness.

Blind bake the pastry (no need to use any weights or beans to hold it down) in the oven for 25 minutes or until golden brown, and then set aside.

If the edge of the pastry goes brown first but the base isn’t cooked yet, then cover the pie lightly in aluminium foil and put it back in the oven.

This way the base will cook without continuing to darken the edges.

While the pie base is blind baking in the oven prepare the topping and filling.

For the topping:
Boil the sweet potato in a large pan of water until tender. Drain it, place it back in the pan, add the garlic, thyme, olive oil and season with salt and pepper.

Roughly mash all these ingredients together and set aside. I like my mash very rustic so I don’t bother mashing it until its smooth.

For the filling:
In a large and deep frying pan heat the olive oil and brown and seal the chicken, then remove from pan and set aside.

Do not cook the chicken the whole way through, you only want to seal and brown it, the rest of the cooking will occur in the pie.

In the same pan add the butter, onions, leeks, carrots, mushrooms, bay leaves, thyme and garlic, then season with salt and pepper.

Cook this on a medium heat for 20 minutes or until the mixture has begun to caramelise, this will bring out the flavour and sweetness in the vegetables.

Add the chicken back to the pan, along with a splash of chicken stock, the pecorino cheese and the zest of one lemon.

Remove the pan from the heat, remove the 3 bay leaves and put mixture aside to cool down.

Assembling the pie:
Once the filling has cooled down pour it into the pie base.

Top with the sweet potato mash, smooth this across the top of the pie and top with another grating of pecorino cheese.

Once the pie is done I set it aside for 10 minutes before slicing it. This allows the pie to cool down, it will still be warm when you serve it but will hold together much better. 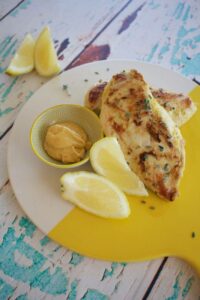 This is the perfect mid week meal when you need dinner on the table super quick. I’ve given this recipe to a few family members 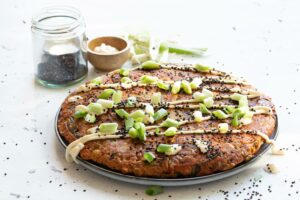 This dish has been inspired by a traditional Japanese dish, Okonomiyaki. Traditionally it’s made with sliced cabbage but I’ve altered my recipe and added different 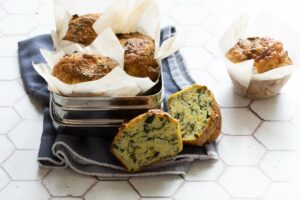 These muffins are very tasty and super easy to make. My most common advice I give as a nutritionist is to incorporate good fats, complete

We’d love you to join us. We promise that we won’t bombard you! 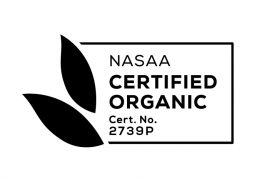